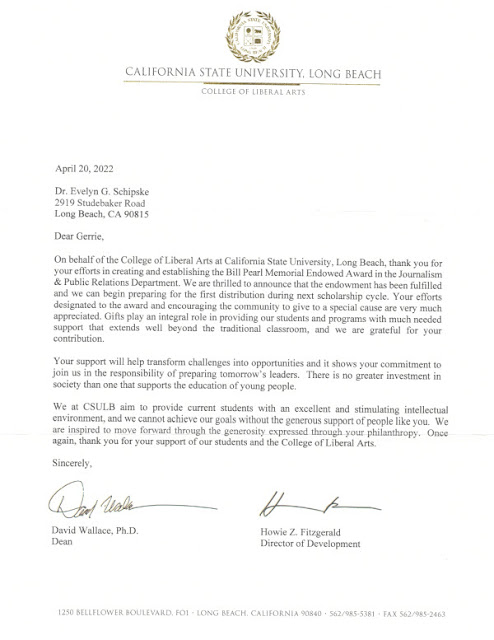 Gerrie Schipske today announced that she has received confirmation from CSULB that the “Bill Pearl Community Journalism Scholarship” has been fully endowed. Schipske created and established the scholarship before the publisher of LBREPORT.com died from cancer as a tribute to the excellent work he did to help hold local government accountable through his extensive reporting.

“CSULB Journalism and Public Relations Department confirmed that the ‘Bill Pearl Memorial Endowed Award’ has been fully endowed through more than $25,000 in contributions,” says Schipske.

The former City Councilwoman first met Bill Pearl right after her election to City Council in 2006. “I cannot say enough about how grateful I am to have known Bill. He loved community journalism and worked tirelessly, by himself, to make sure the decision-making process of local government was explained and exposed to the public,” says Schipske.

Schipske says Pearl became very emotional when she informed him that a scholarship was being set up in his name.

“In so many ways Bill Pearl was humble, stubborn but humble. He couldn’t believe that anyone would be interested in donating to a journalism scholarship in his name. But when I told him that we were already halfway to a full endowment he was overwhelmed.”

Schipske adds that Pearl asked for a list of donors so he could tell them “thank you” before he died. " After his passing, several additional donors stepped up to make certain the scholarship was fully endowed with $25,000. Thank you to everyone who helped honor Bill Pearl and LBREPORT.”
Bill Pearl Community Journalism Scholarship at CSULB scholarship endowed